Uganda: The Pearl of Africa

The Captain and I awake in darkness to the sounds of the jungle outside our tent.  I grab my torch and make my way out of the mosquito net that surrounds our bed toward a window.  I raise the flap and see the morning mist lingering over the forested mountains.  All my life I had dreamed of going to Africa and finally there I was with the love of my life camped out in the Ugandan wilderness.  The previous day we ventured out into the lush green jungle in search of mountain gorillas and got more than we bargained for.  Afterward we ate our packed lunch on our private deck overlooking the mountains before going on a walking tour of the village.  We met villagers including the local medicine man, learned about agriculture, sampled Ugandan waragi, and danced with the Batwa.  The Batwa are a tribal group of pygmies driven by the unrest in nearby Congo into the wilds of Uganda.  They still face discrimination, but have at least found a home safe from violence.  It seemed everywhere we went we were greeted by friendly faces and even friendlier smiles.  In all of our travels we had never felt more welcomed than by the Ugandans. 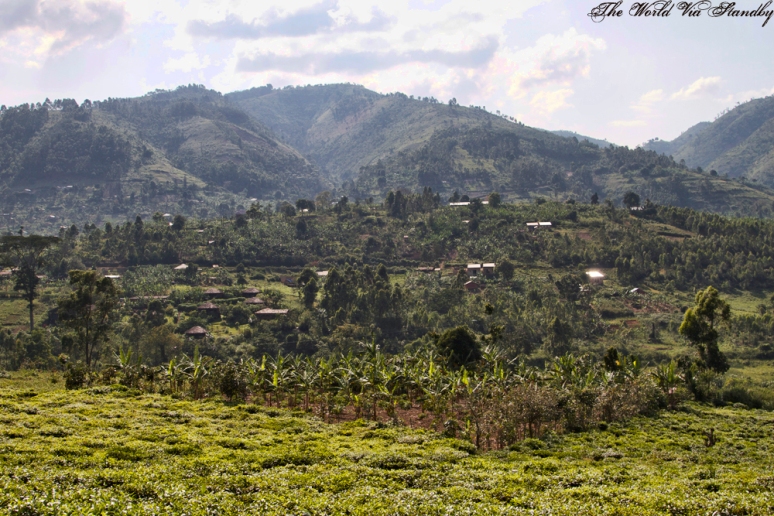 My husband and I dress in khakis and gather our belongings, eager to start the long journey to Queen Elizabeth National Park.  After a quick breakfast in the dining hut we pick up our packed lunches and head over to the Toyota Prado.  I take a seat next to the Captain in the back of the vehicle as we leave for Ishasha National Park.  Ishasha National Park is one of the jewels in Africa’s pearly crown.  Here alone on Earth do lion’s climb trees.  Although all lions are capable of such behavior, only in Ishasha do they naturally exhibit a climbing tendency.  And climb they do; acacias and fig trees litter the savannah, and they make the perfect place for a hungry carnivore to catch a cool afternoon breeze. 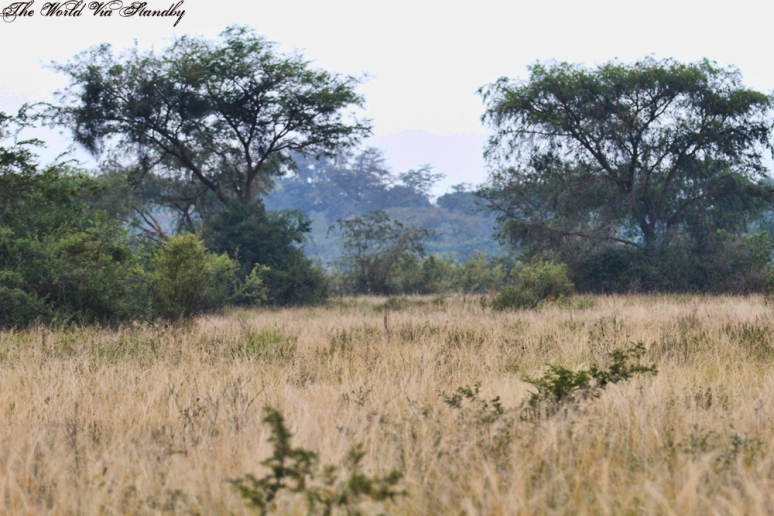 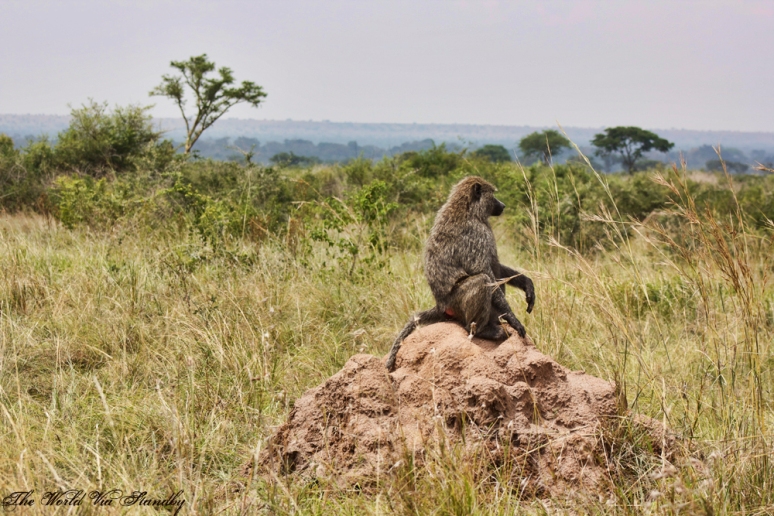 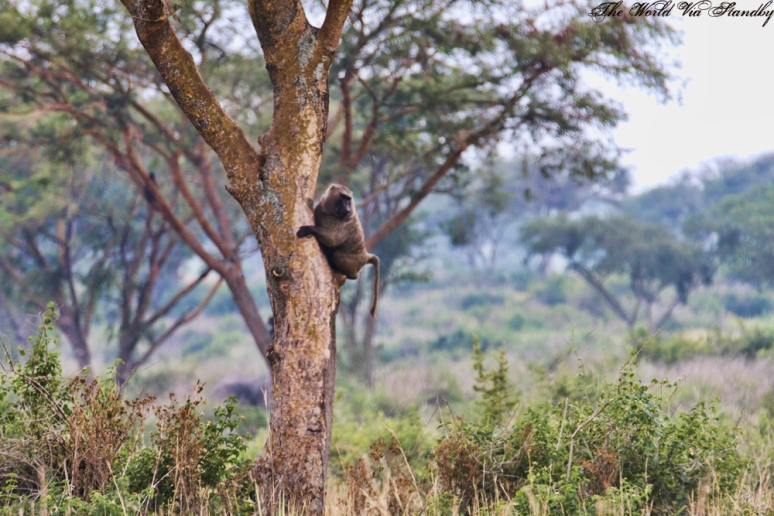 Hours later the five of us sit silently in the parked vehicle scouring the savannah for lions. In our time at the park we had already photographed various wildlife including kob, cape buffalo, baboons, and various birds; but have not yet spotted the tree climbing lions for which Ishasha is known.

“See anything?” Paul, our guide, asks.

Haphazardly, I raise my binoculars to my face and survey the branches of an acacia tree.  I don’t see anything and neither do the others so we continue on.  It goes on like this several more times with cameras on our laps and binoculars pressed to our faces until Paul and the Captain spot movement atop an acacia tree in the distance.

Slowly and carefully Paul drives toward it and turns off the engine. 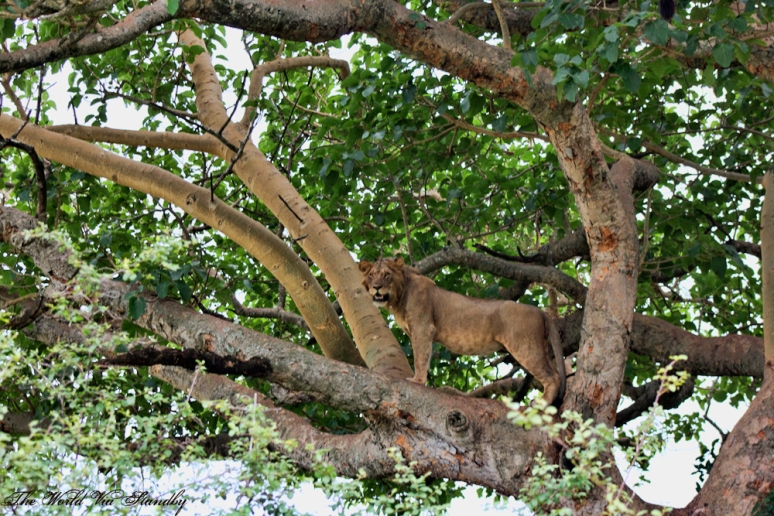 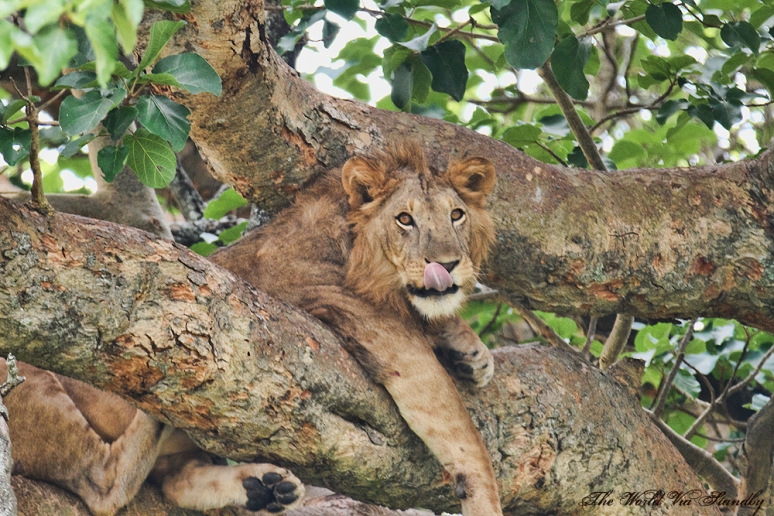 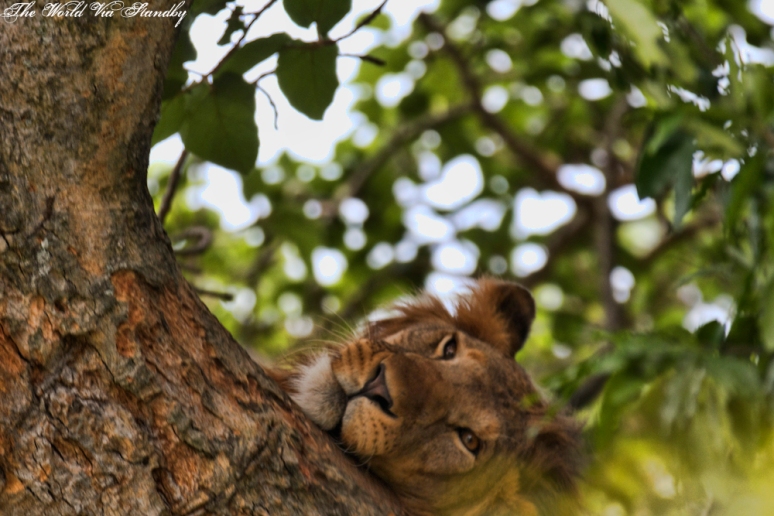 We all looked up and there he was, a young male lion sleeping on a branch.  His eyes slowly opened and their golden gaze seemed to pierce right through me.  Fortunately, he deemed us no threat and yawned lazily before heading back to sleep.  So focused were we on that single lion, however, that we didn’t notice the rest of the pride sleeping on the tree!  It was quite a startling realization how easily they blend into the background and I started to wonder if we had missed any along the way.

After taking numerous pictures of the lions we continued on our way toward the rest area near the park’s exit for lunch.  Aside from the park rangers we were the only group there.  We took our seats on a wooden table underneath a large tree and unpacked the paper bags that contained our food.  It was quite a thrilling experience eating our lunch out in the African bush where some of the wildest animals on the planet roam freely.

“Are you alright?” My husband asks noticing that I’ve barely touched my food.  I love food and can eat almost anything so it was unlike me to not dive in.

“Maybe it’s the heat.” I reply putting the unopened juice box, crackers, fruit, and cookies back into the paper bag.  Africa is not the place to waste food so I end up giving my lunch pack to Paul in case he wanted it or knew someone who did. While the others eat I take small bites of my chapati sandwich and listen as Aloysius regaled us with stories.

It is late afternoon when we arrive at our luxurious hotel The Kingfisher Lodge.  Originally we were going to stay at the Queen Elizabeth Bush Lodge, but for unknown reasons our accommodations fell through and we were booked elsewhere.  I have no problems with roughing it and would have been open to staying in a small canvas tent in the wild open plains, but it was fortuitous that we were given a more comfortable place to spend the night due to my unwellness.  Illness was a constant threat to the explorers that initially mapped this continent, and I was about to find out firsthand what it was like to get sick thousands of miles away from home.  Putting the ominous signs of impending fever behind us, the Captain and I shared a sunset overlooking the plain.  The Kingfisher is built on a bluff thats plunges dramatically towards the savannah below, and the Captain sipped his gin and tonic with deep enjoyment as we savored a truly unrivaled vista unveiled in front of us.  Africa in all its primal glory, spread away from us like a rich carpet ending in a swath of fire.  The Captain drank deep; the savannah beckoned and tomorrow we would heed its call.